Hermes – Messenger of the gods

In Greek mythology, Hermes is a Greek god, also known as Mercury (Mercurius) among the Roman gods. Numerous stories tell about his wise and tactical behaviour, especially about his great negotiating skills, even in most difficult situations.

Hermes (Mercury) is one of the sons of Zeus, the father of the gods, and Pleiade Maia, a daughter of Atlas. Depending on the reference, his birthplace is named as Mount Kyllene in Arcania or the area around Mount Olympus. In Greek mythology he is one of the twelve gods of Olympus. In mythology we learn about his inventiveness and imagination, his grandiose inventive talent and his extraordinary creativity. His great mobility and agility were paired with a mischievous, likeable and cheerful disposition.

As the god of science he is closely connected with chemistry, especially alchemy. Thus Mercurius is a mediating principle between the opposite poles in alchemy. Hermes is, among other things, also the patron god of merchants and art dealers. He is the god of travelers and the protective god of traffic. His other domains include magic in particular, whereby Hermes was not only the god of magic, but also the god of jugglers and thieves. He is also a master of deception and confusion.

Further symbols of Hermes’ rule are the scroll and his shepherd’s crook. Thus he is also the god of science, of language and oratory and a god of shepherds. Hermes is the patron saint of the Hermetic Academy. The Hermetic Academy preserves hermetic instructions that help people to find meaning, self-realization and self-knowledge. 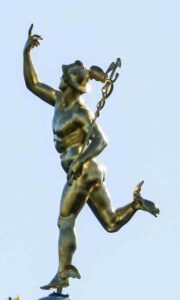