The biblical story of creation refers to the tree of knowledge, which plays an essential role in the fall from the Garden of Eden. Adam and Eve, on the advice of the serpent of temptation, are seduced to eat the fruit of the tree of knowledge. Thus man falls from heavenly unity into the sorrowful world of polarity.

The Genesis of the Torah describes that in the midst of the biblical Garden of Eden there is the tree of life and the tree of knowledge. Sometimes the fruit of the tree of knowledge is mistakenly represented as an apple. But the Bible mentions only a fruit. By eating from the tree of knowledge, man hopes to be able to distinguish between good and evil like God. Adam and Eve eat from it, although God has warned them that it would make them mortal. Because of the fruit of the tree of knowledge, they lose their divine harmony and unity in favor of the world of polarity. In this polar world there are great challenges in partnership, family, profession and other relationships. Pain, suffering, worries and fears are being experienced to allow evolution. The Hermetic Academy gives us methods and tools to understand this process consciously and to participate in growth and evolution.

Through this first sin Adam and Eve feel guilt and shame for the first time. They were not able to perceive this in unity. Eve gives the guilt to the serpent – because it would have deceived Eve, and Adam assigns the guilt to Eve, and claims that she would have deceived him to eat from the fruit of the tree of knowledge. There is an important message hidden here. No one else is to blame for Adam and Eve’s decision, for they were free to decide. So the realization that man himself sows the seed for his destiny and must free himself from finger-pointing people and situations is inevitable for soul growth. An important tool for this is the power of forgiveness. To forgive oneself and others may be very healthy.

Adam and Eve also perceived shame. Shame is related to sexuality. In some religions and eastern teachings it is common that asceticism is the right way of spirituality. But asceticism leads to the suppression of a very strong force, which can have an abominable effect. If all people would live selfishly abstinent, humanity would die out. Other doctrines, on the other hand, proclaim that complete freedom of choice and promiscuity is necessary to experience Liberty and Evolution. This is only the other extreme and involves more suffering than liberation.

The middle way or the way of balance means to purge the sexual power of perverse, humiliating and selfish ideas and to live sexuality as an expression of love in a relationship. The courses of the Hermetic Academy help to get an orientation about where we come from, what our task as a human being is and where the development of the human being leads. 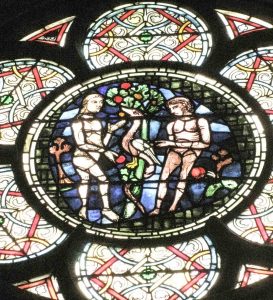