The activities of secret societies and secret alliances

There are differences between discrete societies and secret societies. In discrete societies, the general public is aware that they exist. The members are partly known, even superficial knowledge can be explored from outside. Their members share a collective vision of certain things. Nevertheless, there is a requirement of secrecy regarding symbols, rituals and inner teachings.

With secret societies it is quite different. The general public knows nothing about their existence, where they meet, what their goals are, who the members are, what happens at their meetings, etc. Members are required to maintain strict secrecy about all matters and about the existence of the organization!

Some secret societies are in guardians of age-old knowledge that deals with the most important questions and answers of life. These include: what is man, where does he come from, where is he developing and what tools are available to him – questions and answers which cannot be understood by the general public. In order to protect wisdom, it is only passed on from mouth to ear. In addition, absolute silence and intensive ethical training is demanded by every member until a candidate proves to be worthy to experience this knowledge.

If, for any reason, passwords, symbols or rituals have nevertheless been published, they are changed and the old ones lose their worth. Sometimes magical tools with profane truths are intentionally distributed among the general public in order to distract them and satisfy them with pseudo-knowledge (e.g. symbols of the Tarot, books on magic, rituals, etc.). Secret societies elect their members themselves. No one can join such an organization on his or her own initiative. If a student is willing, the community will contact him or her. Through initiation he is accepted and can ascend within the organization (order), depending on his soul maturity. Thus he approaches the secret knowledge of the organisation.

Another reason for the strict secrecy of such societies, which is mainly from earlier times, but which still takes place today, is the persecution by other societies, such as politics, economy, religions, faith communities etc., which pursue commercial goals, such as power, manipulation, domination, influencing for their own purposes, criminal goals, oppression of those who disagree, etc. Even if declared under terms such as the common welfare, supporting the poor, improving the world, the world climate, and promoting faith or the divine will, their true purpose ist revealed by authentic secret societies because they are able to understand these lower aims. That’ s why they are a thorn in the side of these organizations and individuals. By disappearing from the public view, secret societies avoid the access of the worldly power structures. So even the prohibition of lodges, as it has happened several times in world history, can only cause minor damage, because secret societies are not tangible and cannot be located. 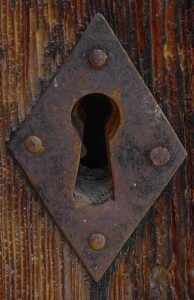