Greek mythology and its polytheism are the cornerstones of our Western culture. At the same time, essential elements of the Western mystery tradition originate from the ancient Greek world of gods. The messenger of the gods Hermes and the godly figure Hermes Trismegistos are omnipresent in the Hermetic Doctrine.

Greek Gods – Ancient Greeks believed that the three sons of the primal god Kronos – Zeus, Poseidon and Hades – had divided the world amongst themselves millions of years ago after defeating and killing their father in a fierce battle. As Hades established his position as the god of the underworld and Poseidon ruled the seas, Zeus became the chief god. He ruled heaven and earth and the dark Tartaros, a dark, deep abyss beneath the earth’s surface. In addition to these three main deities, there were many other deities. All mysterious and invisible forces of nature, as well as mountains and rivers, were elevated by the ancient Greeks into gods.

In the Greek Pantheon there were also demigods – centaurs and satyrs – who were half human, half animal. While the seas were inhabited by sea goddesses – the Okeanids, eternally young and beautiful women -the nymphs – lived in the mountain streams.

The most powerful gods lived in golden palaces on Mount Olympus. The divine foods nectar and Ambrosia, which made them immortal and eternally young, were consumed at golden tables of golden tableware.

They were all ruled by Zeus the Allgod, his weapons were thunderbolts and lightnings and his outbursts of rage and wrath were feared by men and gods alike. His staff of advisors consisted of the twelve most important gods, most of whom were his children or brothers and sisters. Each god had a divine task, for example his sister, the beautiful Demeter, was the goddess of fertility. His son Hermes was Zeus’ faithful messenger and was depicted with a winged helmet, golden sandals and Hermes staff. The term “hermetic” originates from the messenger of the gods Hermes. Because of his supreme place in the hierarchy, his cult was often associated with monarchs. Like Hermes, the Hermetic Academy can be regarded as a “mediator”. The Hermetic Academy teaches the timeless wisdom that can connect man with the highest. Like Hermes, it is a bridge between man and God.

There were several other important gods in Greek mythology. For example, the sun god Helios, whose task was to illuminate the world. From his golden chariot he drew the sun over the sky daily and from above overlooked everything that happened on earth and on Mount Olympus.

Finally, Eros, the God of eternal love, should be mentioned. With his golden arrows of love, he spread love between the gods and among men. 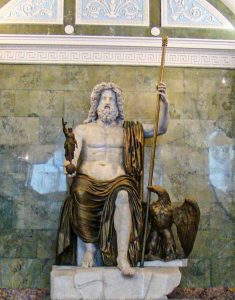