Gematria: Numbers do not only have a mathematical significance, but rather transport certain ideas and meanings. This enables the wise man to communicate complex hidden contents using numbers. Gematria is a sub-discipline of Kabbalah, which is often misunderstood and misused merely as a numerology of divination.

Number symbolism (or Gematria, Numerology) is related to the assignment of a meaning to numbers and combinations of numbers. The numbers 0 to 9 represent a complete cycle. This cycle begins with 0 and ends with 9, only to start again at a higher level. This is a repetitive rhythm. Any number above 9 can be reduced to these 9 basic numbers by theosophical reduction by forming the sum of the cross sections. Each number has a specific meaning and thus transports a unique information. For example, each number represents a sphere (Sephirah) in the Tree of Life of Kabbalah. In the Tree of Life there are 10 Sephiroth.

0 symbolizes nothingness, the undifferentiated power that precedes revelation. It also symbolizes the limitless light and limitless freedom. The zero is the eternal and infinite source. It represents the rootless root of creation. It corresponds to the holy ellipse, the endless line of eternity, the cosmic egg and the superconsciousness.

The number 1 symbolizes the beginning. It is the “first” number in Gematria and thus the primal will, unity and uniqueness. Likewise it corresponds to individuality and concentration. Thus it is also the self-awareness, the defined in contrast to the undefined source. In Kabbalah there is a connection to the crown of the tree of life.

The number 2 is the doubling, that is, the repetition. It also represents science. At the same time it shows opposition and polarity. Thus it is related to subdivision, second rank, subordination and dependence. It corresponds to the subconscious. In Kabbalah there is a reference to the Sephirah of wisdom.

The number 4 is related to order, control and authority. There are also aspects of command and dominance. This number indicates a classifying authority of the self-consciousness, namely the intellect. This order is developed through the mediation of an absolute abstract regularity. In Kabbalah it corresponds to the Sephirah of mercy.

The number 5 symbolizes the idea of mediation, because it is in the center of the numerical series from 1 to 9. It is the number of man who mediates between heaven and earth and corresponds to Hermes, the messenger of the gods. Therefore it also has the meaning of reconciliation, adaptation and interference. It also refers to the 5 senses. In Kabbalah, this number of the Sephirah is assigned to justice, which indicates the correct application of the law.

The number 6 is the number of interaction, exchange, correspondence and response. Thus it stands for harmony and unison, for cooperation and agreement. In Kabbalah it also symbolizes balance and symmetry. In the Tree of Life of Kabbalah, this number is assigned to the Sephirah of beauty.

The number 7 symbolizes balance. It is the result of the exact application of the law of symmetry and interaction. It embodies mastery and serenity as well as security and certainty, tranquillity, conquest and victory. It is the number of the Bible, a holy number. There are 7 ancient planets in astrology, 7 metals in alchemy, 7 days of the week, 7 energy centers (chakras). The 7 is said to be the number that the Creator loves the most. In Kabbalah it is assigned to the Sephirah of Victory.

In Gematria the number 8 corresponds to rhythm, periodicity and alternation, such as ebb and flow, involution and evolution. It indicates vibration, which is already expressed by its line. In mathematics, the horizontal 8 is the sign of infinity. In Gnosis it is the number of Christ. In Kabbalah it is assigned the Sephirah of glory.

The number 9 is the completion of a cycle and therefore describes ideas like completion, end and fulfilment. It represents the end result of the preceding numbers. In mysticism it refers to perfection and adeptship. There are 3 triads with each 3 spheres in the Tree of Life of Kabbalah. It also corresponds to the Kabbalistic Sephirah of the foundation.

The number 10 points to the connection of the numbers 1 and 0, i.e. the self-consciousness (1) and the superconsciousness (0). It also represents a repetition of 1 on a higher level. It therefore represents the completion of dominion and is called the Kingdom by the Kabbalists.

Mystical numbers can also be found in the 22 Hebrew letters. These are not only letters, but also numbers. Each letter has a certain numerical value. In this way, words can also be used to convey occult ideas and meanings behind the words. The numerical values of the word can be determined from the individual letters.

Completely different words that appear to have a completely different meaning can still have the same numerical value in Gematria, which then indicates an occult relationship or analogy. The Bible is filled with such indications.

Mystical numbers can also be found in the 22 Hebrew letters. These are not only letters, but also numbers. Each letter has a certain numerical value. In this way, words can also be used to convey occult ideas and meanings behind the words. The numerical values of the word can be determined from the individual letters.

Completely different words that appear to have a completely different meaning can still have the same numerical value in Gematria, which then indicates an occult relationship or analogy. The Bible is filled with such indications.

The Hebrew term NECHASH (NChSh) is translated as “snake” and has the numerical value 358.

At the same time, the Hebrew term MESHIACH (MShYCH), which means Redeemer (Messiah), also has the numerical value 358.

In this example the hidden numerical symbolism between the serpent of temptation and the Redeemer (Messiah) becomes visible. The snake power is partly responsible for the fall from the Garden of Eden but also for the return to the lost paradise. That is why in Gnostic illustrations there are parallels between Jesus and the serpent. Thus there are depictions with a crucified serpent. If you have already tried all possible ways and have not found satisfactory answers, we recommend the in-depth courses of the Hermetic Academy. 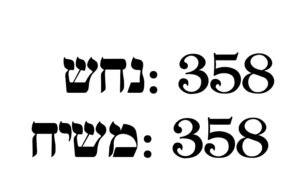