For thousands of years, the five-pointed star has been regarded as one of the most powerful and meaningful symbols in all cultures, and is also attributed magical importance. While it was once the symbol for both the planet and the goddess Venus, it later became the Pythagoreans’ distinctive mark. Plato, for his part, called it the greatest and most powerful symbol of all. From the geometric and arithmetic knowledge it is possible to derive universal laws that are reflected in spiritual principles.

Pentagram – Nature reveals its secrets generously to the observer: It is worthwhile to look for the golden ratio (e.g. sunflower), the Fibonacci numbers (e.g. pine cone) or the pentagram (e.g. starfish) and examine the underlying principles. The pentagram combines the golden section with the principle of life. Just the same as in nature, where the similarity is reproduced from the existing, the geometry of the pentagram can be continued in both directions as often as desired.

In a spiritual context, the task of man is understood as ” taking up his spiritual heritage in the image of God and regaining authority” (Elias Rubenstein). Exactly this is implied by the pentagram with the point upwards: the dominion of the spirit (quintessence) over nature. The other four points represent the four elements (earth, air, water, fire), which students must balance and refine on the spiritual path. This is done gradually in the Lesser Mysteries, the four lower spheres of the Tree of Life of Kabbalah.

The pentagram represents spiritual self-rule, the sign of the Word made flesh and the most important symbol of the sphere of Mars. In the Mystery Tradition, it also represents the creative power invested in man, as well as the manifestation of the life force. Furthermore, the pentagram contains the aspect of redemption (Star of Bethlehem), which directs the path of humanity – from the Fall of Man to the process of learning and ascension.

This star polygon is often used as a protective amulet, as it is supposed to protect against demons and evil influences. Thus it is also the tool for the counter spell of the so-called black magic, because if the pentagram is turned upside down, the meaning is reversed and addresses the dark side and its powers.

The tools of the Hermetic Academy teach the use of the pentagram to achieve conscious spiritual dominion over the elemental nature. 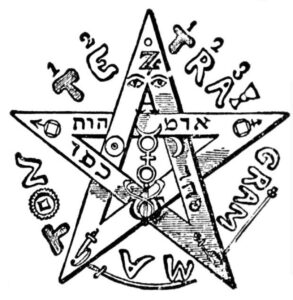