To enlightenment through hermetics

Enlightenment is a state of consciousness that has been experienced by different people since the beginning of mankind. There are different levels of enlightenment. Contrary to the trend of popular esotericism, the mystery tradition understands enlightenment as something different. This is a permanent state of adeptship (hermetic).

Hermetic – Enlightenment, is connected to the Latin word illuminatio or illumination. This refers to a spiritual experience where a person crosses the ordinary consciousness of daily life and experiences a higher insight or inspiration. This is often associated with a profound change in personality. There are different conceptions of what enlightenment ultimately means. Some people call enlightenment a spontaneously appearing higher state of consciousness during a meditation, others practice continuous mental exercises that lead to a higher consciousness through individual efforts. Enlightenment is also understood as an act of divine grace.

For millennia, the human spirit has been drawn to the harmful and destructive side because selfishness and self-interest have become strong positions. The great teachers of humanity such as Buddha, Moses, Jesus or Krishna brought spiritual light to humanity and led towards a path of salvation and enlightenment. Their teachings emphasized the importance of selfless action and the purity of motives, so that man can serve the whole through his individual liberation. Despite the vivid demonstrations of Ageless Wisdom, humanity still has a tendency to egoism and self-interest thousands of years after the appearance of these masters.

Those who truly aspire for enlightenment must release their selfish tendencies and devote themselves fully to life. All aspects of personality must be purified. When man is focused on the divine, a new consciousness awakens in him. The birth of light can take place and the adept awakens from the graves of error.

The enlightened adept of the Western mystery tradition has realized enlightenment in his daily consciousness. This is a man who has left the chains of personality behind him and is truly liberated. The adept is unified with the Christ-principle and thus has become the Messiah or Redeemer. The adept has an enlightened view of himself and the world. He is a real Christ, Osiris, Buddha or Krishna, because he is able to express this principle fully aware. The great sages agree that life is about more than just understanding things intellectually to the smallest detail, but rather developing the ability to love infinitely and consciously. The instructions of the Hermetic Academy provide the practical keys for achieving enlightenment. 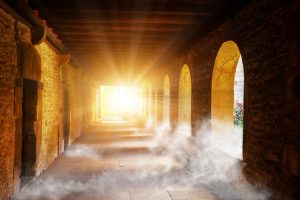