Cherubim – The supernatural powers of Angels

Cherubim are already mentioned in the Bible and are considered to be exalted angelic beings in the service of God. They are also called spirits of harmony. Together with the seraphim and thrones, the cherubim form the uppermost triad of beings in the celestial hierarchy who are closest to and around God and have the immediate sight of God.

The cherubim directly execute the will of God. Its nature testifies to the highest purity. The name “cherubim” is plural of “cherub” and is derived from Hebrew. The meaning is “fullness of knowledge”. Thus, from the perspective of Kabbalah, its name already reveals the capacity of receptivity to the fullness of God’s knowledge and the gift of communicating this supernatural wisdom.

According to the anthroposopher Rudolf Steiner, the wisdom that the cherubim radiate can only be guessed at by contemplating the wisdom of outstanding people who have spent many years of their lives acquiring wisdom and in whose language this super-personal wisdom can be observed.

The wisdom that cherubim receive from God is passed on to the following hierarchies. From the Hermetic point of view, they are decisively involved in the development of the world in their domain, including the development of planetary systems. However, the sphere of action of the cherubim extends far beyond our solar system. The cherubim are also considered the beings of the zodiac and creators of the region of eternity.

In the Bible there are numerous mentions of the cherubim. For example, they are mentioned in Genesis as guardians of the Tree of Life and are also mentioned in the expulsion from Paradise. There are also references in the Psalms or in the prophetic throne chariot vision of Ezekiel. Several biblical passages tell of God as the one who is enthroned above the cherubim. Thus the cherubim are portrayed in God’s apparitions as the bearers of God.

Their figure is described in the vision of Ezekiel as a four-winged being with four faces. These are the mystical lion, bull, eagle and man. Their bodies are equipped with human hands and bull’s feet and are covered with eyes. Cherubim can move in all four directions without turning, depending on where the spirit drives them. In astrology, these four beings correspond to the four cardinal points, the four elements or the four directions. In the Gnostic tradition they correspond to the four evangelists of the New Testament of the Bible.

In the Gnostic and Kabbalah courses of the Hermetic Academy, practical instructions are given on how man can realize contact with the higher/divine forces 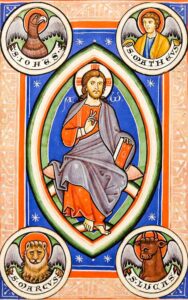 Contents show
1 Cherubim are already mentioned in the Bible and are considered to be exalted angelic beings in the service of God. They are also called spirits of harmony. Together with the seraphim and thrones, the cherubim form the uppermost triad of beings in the celestial hierarchy who are closest to and around God and have the immediate sight of God.
1.1 Mentions
HermetikTeam32020-12-17T09:59:12+01:00February 4th, 2020|Allgemein|