Initiation is a term which has a mysterious connotation in our western world and makes many people curious or sometimes even deterred. So what is really behind it? The Duden provides the following explanation: “[by certain customs regulated] admission of a newcomer into a community of social standing or age, a secret society or the like, especially the introduction of young people into the circle of adults among primitive peoples”. This declaration contains three decisive elements: firstly, the transition, the passage from one status to another, secondly, the acceptance into an existing community, and thirdly, the ritual act associated with it. However, the process of development, which is initiated by the ritual, is barely hinted at.

Initiation – The spiritual context of an initiatory order presupposes the contact of the initiator with the higher worlds. The spiritual initiatory flame must be maintained, otherwise the effect is lost. The force that circulates in a mystery school produces an enormous effect. In the jungle of secret societies, orders and mystery schools it is difficult for the inexperienced to find their place and distinguish an authentic organization from a fake one. Initiations in the mysteries lead to a higher world and effect the ascent of the soul along the Jacob’s ladder. This requires the striving for the higher, the willingness to serve and to subordinate oneself, as well as the willingness to give up the selfish parts of the personality.

Initiation is a ritual-magical process that gradually leads to connection with ancient wisdom and to the answers to the ultimate questions of life. Rituals are generally an important part of the Western mystery tradition. They serve to raise awareness for the cosmic order and laws. Magic, which is expressed, among other things, through rituals, is a secret science that is kept very carefully and is not passed on lightly. Therefore, aspirants commit themselves to secrecy before they are admitted. The organization carefully examines which candidates prove to be worthy of being initiated.

Initiation requires willingness to take responsibility. To receive it is a gift and a grace. The Hermetic Academy is an authentic mystery school that provides access to the initiatory path of the Western mystery tradition. 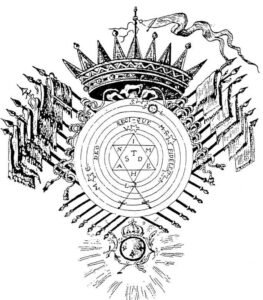