The power of the hermetic symbols

Hermetic symbols can be found in the cult centers of ancient civilizations and cultures such as the Egyptian, Persian and Indian high cultures, but also in the spiritual works of Kabbalists, alchemists and mystics such as Jakob Boehme and Robert Fludd – to name just two representatives. Particularly since the Renaissance and the associated printing of books, the teaching of the Ageless Wisdom of Hermeticism, which had long been believed to be lost, and which was often conveyed through symbols, has reappeared more and more in the awareness of humanity.

Hermetic symbols – Even in the religions of today, symbols of Hermeticism can be found, although the followers are rarely aware of this. The term “symbol” originates in the Greek “symbolon” and means “thrown together”. The purpose of symbols is to bring something together. Since the fall of the heavens, the fall from the Garden of Eden, man has apparently lived apart from God – in duality. So he has lost access to his true home. Symbols serve to reconnect man with his spiritual home – back to the original unity – back to God.

Essentially, symbols are pictorial keys that can connect the lower with the higher. They are patterns and archetypes of the soul – which are the universal language of the collective subconscious. Hermetic symbols can be found in the keys of Tarot and Alchemy, among others. Often they are very simple geometric shapes like the circle. All people know this form whenever they think about the sun and moon. In most cultures the circle is a symbol for the heavenly sphere. Another symbol would be for example a regular cross, which is associated with 4 cardinal points, but also with the arrangement of opposites around a center.

Further examples of symbols would be the snake, the star, the crescent moon and many others, which can be discovered across cultures and religions. The actual effect of such symbols takes place on a deep, subtle level. This means that symbols do not necessarily have to be fully understood intellectually in order to have an impact on people. The knowledge of the true meaning and the power of the effect of hermetic symbols has been a treasure of the mystery tradition since ancient times. The Hermetic Academy preserves this knowledge and teaches the practical application in the respective courses. By working with hermetic symbols, man can come into contact with a higher power and thus, step by step, return to divine unity. 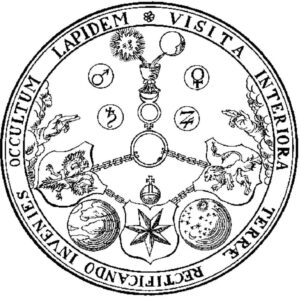