The term reincarnation derives from the Latin “re-carneus”. This represents the cycle of birth, death and rebirth into an earthly body. Reincarnation doctrines are not very familiar to Western spiritual students at first. This is often due to the imprint of religious education in the belief scheme of the great Christian official churches.

Reincarnation – Since the Council of Nicaea in 325 A.D., the official churches have eliminated almost all writings that point to the reincarnation cycle of humanity. In the canon of the Bible, as it can still be found today in the various translations of the official churches, only those texts were deliberately included which were compatible with this doctrine. The fact is that all spiritual traditions of antiquity, such as the Original Christians and the Gnostics, as well as Buddhists and Hinduists, and to some extent also Islam and mystical Judaism, have recognized and continue to recognize rebirth as a fact.

For thousands of years, people were persecuted and murdered in Central Europe as heretics, who continued to regard the cycle of birth and rebirth as a fact and lived according to it, according to the Gnostics and the Cathars. Only since the scientifically founded rediscovery of the apocryphal gospels of Nag Hammadi and Qumran, especially through the texts of the Gospel of Thomas, did it become clear to the general public that the state churches had deliberately withheld this essential essence of the original Christian doctrine of faith from people for almost 2,000 years.

In the German-speaking countries, many upper school pupils have their first contact with the idea of rebirth when they discover the literature of Hermann Hesse, especially his wonderful book “Siddharta”. In this magnificent work of world literature, the mechanism of samsara, the perpetual cycle of birth and rebirth, is described almost magically. In doing so, the attentive researcher can find important passages in the Bible which escaped the faith censorship of the churches. For example, in the Psalms, 90, which say: “You make men return to the dust and say: ‘Come again, you men!

Thus the mainstream churches once knew about the nature and consequences of reincarnation for man. But it was much easier, and more promising for the indulgence trade, to make the flocks believe that this life was their only one and that redemption in heaven was only conceivable through an atonement in this life. This false credo can apparently no longer be abandoned. Whoever looks at Michelangelo’s fresco “The Last Judgement” in the Sistine Chapel in the Vatican inevitably recognizes the perpetual ascent and descent of souls who can only escape the wheel of return by purification.

The teachings of reincarnation are extensive. But the primary concern is not what will await mankind one day, but life in the here and now. Man has the possibility to find his way back to the lost paradise. In the same way, man has the evolutionary potential to create a subtle body that will enable him to exist in the next world, as Christ also reported in the traditional gospels. The teachings of Hermeticism guard appropriate tools to accomplish this ascent of the soul to the Kingdom of Heaven. Hermeticism does not offer weekend seminars or quick courses for this purpose, but can be regarded as a spiritual path of life. The Hermetic Academy is an authentic bearer of the Hermetic tradition, which preserves these powerful methods and tools. 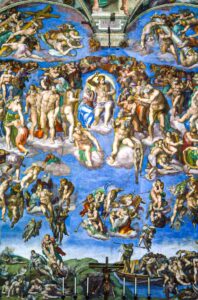