The dark temptation of magic

The sorcerer can be carefully distinguished from the magician, even if he likes to call himself a magician. The sorcerer, however, is far from being a true magician.

Anyone who uses magic to increase power selfishly is a sorcerer at best, but not a true magician of light. The sorcerer can set individual secondary areas of magic in motion within a small manageable area by using certain techniques. He knows, when he sets this or that power in motion, that this or that will happen.

However, with this he is only trying to enhance his own existence and to manipulate his environment in an antisocial way and to subject it to his own will or to make it compliant to his personal ideas. The sorcerer is always fixed on the outside and focused on achieving certain results that his ego (personal will ) considers to be right.

Thus, unlike the true magician of light, the sorcerer has only his own well-being and his small egoistic wishes and needs in mind. He often enjoys astonishing and enchanting the ignorant with so-called apparent “miracles”.

Sorcery is much more widespread than one would initially assume. The sorcerer often wants to be free from any effort, longing or desire, as is often the case in the esoteric scene, for example, to order himself from the universe to fulfill his own little selfish wishes: a little love spell here, a little money spell there, a little damage spell there etc.

However, the sorcerer lacks inner maturity, he uses techniques in alien and deviant ways and only pursues antisocial goals at the expense of others. Instead of serving the welfare of all mankind, he only wants to satisfy his selfish desires by means of a fallen witchcraft. Unlike the magician, therefore, he does not serve the One Source or the primal will to do good, but only acts out of self-interest and thus behaves in an anti-evolutionary and involutionary manner. Like Goethe’s sorcerer’s apprentice, he is a servant of the called powers. A sorcerer serves the diabolic forces and is often unwittingly a servant of satanic powers. The sorcerer practices black magic and in most cases does not know it. He considers himself good and is abysmal evil, since under the guise of goodness he pursues only selfish and manipulative goals.

In reality the sorcerer has no idea about true magic, he does not know what he is doing, because the true cause and source of the powers is unknown to him. He lacks the insight into the true, analogous relationships of these universal laws. The sorcerer lacks the real link to the true source and is subject to the delusion of a separate being: “I and the environment”, which he wants to manipulate by means of magical techniques. In doing so, he acts only out of the ideas and “values” of his ego.

The sorcerer has not realized that the power of true magic always lies only within the order of cosmic laws. The sorcerer is ultimately only a pitiable puppet of certain powers which he believes he can control in his own conceit and self-delusion. The Hermetic Academy teaches the true teachings of Hermetics and instructs the hermetic student into the universal laws. 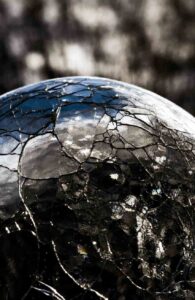