Rosicrucianism is a spiritual and cultural movement. The term can be found in nearly any esoteric encyclopedia. Nevertheless, the explanations are mostly based on a myriad of great fallacies and historical speculations.

Rosicrucians – Some organizations have also adopted the name “Rosicrucians” and have found attention in esoteric historical books, but only a very small number of them are really related to the Rosicrucian initiatory path. They also like to use an external esoteric school to work in the background. The “invisible” Rosicrucian Order has been active in Europe for centuries – if not longer – but to protect the initiatory flame, the invisible seal of secrecy must not be broken.

In the early 17th century, there was a group that, in the publication of two texts, announced an unknown esoteric order that promised an insight into nature, the physical universe, and the spiritual realm hidden from the average person.

In the “Fama Fraternitatis” (1614) the principles and rules of the Rosicrucians are described. It also states that the Order of the Rosicrucians deals with initiatory rituals and secret sciences based on the “Kabbalah“. The Kabbalah is seen as a task and heavenly ladder to communicate between the higher worlds and the earthly world. The Fama Fraternitatis is referred by numerous organizations that consider themselves members of Rosicrucianism.

The six agreements of the “Fama Fraternitatis” were followed by 14 Confessions in the “Confessio Fraternitatis” (1615), which insistently points out the errors of profane communities and their leaders who, under the mask of religion, pursue only political and secular goals. The Order of the Rosicrucians is described as a community unknown to the masses. It is an order of sages whose aim is the improvement and spiritual growth of humanity. The authors have also stated that the Order of the Rosicrucians can only be discovered and participated in its benefits through the will of God.

The “Chymic Wedding” (1616) is erroneously propagated as a third manifesto of the “Brotherhood of the Rosicrucians”, although it differs significantly from the first two in style and content.

The Order of the Rosicrucians is still active today. Worthy candidates are accepted in this order even today and experience the individual 10 degrees of initiation, according to the Tree of Life of the Kabbalah. Many charlatans misuse the term Rosicrucians for commercial purposes and do not have any connection to this teaching. This also includes popular large communities that use this name. The Rosicrucian order does not send initiation rituals by mail and does not award degrees. Every aspirant of a true Rosicrucian Order is ritually initiated in a temple. This distinguishes the wheat from the chaff.

The Hermetic Academy teaches doctrines of this tradition. If the student is ready, he will receive these instructions. The gates of wisdom are closed and wait for the worthy candidate to knock on them! 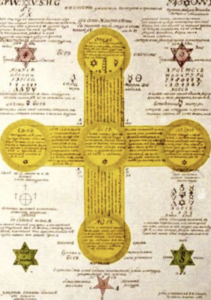